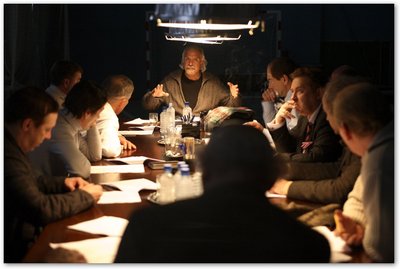 Most of the English-speaking world knows Nikita Mikhalkov as director and star of “Burnt by the Sun.” I used to think this was an excellent thing. Now I am not sure. This has to do with the fact that I want the English-speaking world to also know (and love) Nikita Mikhalkov for “12” – the movie that deserves an Oscar no less, if not more. Just so more people can see it.

“12” is a loose adaptation of “12 Angry Men.” Although modernized – (here comes my only major criticism of the movie) it is nevertheless suffering from a dearth of female characters. Women are in the margins of the picture. At one point, a peripheral (but, as we come to find out, important) character is accused of acting on “jealousy typical of a female.” This is very Russian. Very dramatic and exclusionary. Very Mikhalkov. The film could have used an injection of Inna Churikova’s famed eccentricity, or Olga Ostroumova’s charm. Testosterone is Mikhalkov’s poison and, no matter how he would respond to these words if he saw them (not that he isn’t busy and important), female jurors would have improved the integrity of the film. An all-male jury seems almost Jurassic. Though the fact that Mikhalkov doesn’t have a terrific track-record wherein female characters are concerned (Julia Ormond in “The Barber of Siberia” was, I believe, a victim of poor decisions on Mikhalkov’s part – despite a few terrific scenes, he nevertheless appears to be more skilled at developing a man’s inner world) is a story best left for another bedtime.

In all other aspects, meanwhile, this film is a masterpiece.

A Chechen teenager who keeps terrible memories is accused of murdering his adopted father, a retired Russian officer. “Uncle Volodya,” as the kid calls him, was a friend of the Chechen’s slaughtered family. The case seems simple, but the doubts of one man gradually begin to reveal its inconsistencies; revealing also, in perfect symmetry, human tragedies as modern and immediate as life in Moscow, and as old as the world.

None of this, and I mean none of this, should stop anyone from seeing “’12.” I’m going to put aside the film review clichés now – talk of “great performances” and the “potent symbolism” – and focus on the body of this movie. The terrible scars that run through it. The vulnerable, human warmth of it. The mystery.

The boy dances in his prison cell, just like he danced when separatist fighters rolled into town – the handsome, powerful, briefly joyous, briefly ominous men. There is the horrible intimacy of the murdered parents – the bullethole in the mother’s beautiful face and the knife in the father’s back. A small bird hops with what seems like merry impatience next to an icon of the Virgin Mary – “if you want to fly away, go ahead… if you want to stay-stay….” a man with a weary face tells the bird – “but let this be your decision.” A massive heating pipe snaking through a school gym like a monstrous anaconda tells the story of decades of apathy and indignity that have left an entire nation in tatters. And then there are stories, stories intertwining and giving birth to new stories: makeshift nooses in the hands of children, flying knives, fresh graves overflowing with water – dirty in more ways than one.

Nikita Mikhalkov is a storyteller of Russia, but the stories themselves begin to morph and grow like shadows in the evening, capable of overtaking anyone, anywhere. The movie isn’t some exotic, tourist-y, BBC “country profile”-y jaunt through an ethnic conflict. It crushes you, resuscitates you, crushes you some more.

My friends have complained to me of this movie. Loudly. “Wtf, Mikhalkov still thinks that Russians have a shred of respect left for army officers?” – Maybe not today’s army officers. Maybe only yesterday’s. “Doesn’t he basically imply that the poor little Chechens need the big, courageous Russians to sort them out?” – Or does he actually imply that Russia has no right to shy away from responsibility for the bloody, pulpous mess in Chechnya? “Eeew, his haircut’s bad in it.” – That it is. The only physically attractive characters in this story are, in fact, the Chechens. The Russians are all rumpled, with nicotine-stained fingers.

This movie is flawed, and brilliant. See it. NOW. If you’re in the States, grab some journalist and shake him or her until a promotional copy falls out. Just kidding. But seriously – see it.