But did anyway. I could write about DUKE GOING TO THE FINAL, I could write about politics,  I could make vague references to the things in my life that I am really hoping will go right somehow, and I could even write about getting splashed with holy water in the pre-dawn hours of this Eastern Sunday, but I’m tired, and there is this picture downloaded to my desktop right now, eliciting all sorts of thoughts like nagging mosquitoes, and my defenses are down, I have been wrecked by Moscow, and further pounced-upon by Kiev, and am now obligated to blow off steam:

Mr. President, help me out here: 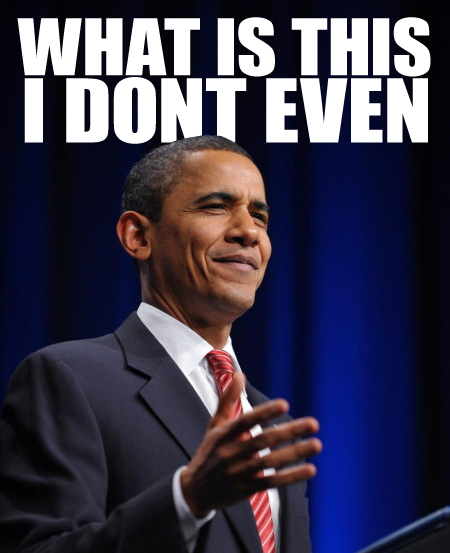 If you know me, you’ll know that I tend to be cool with most forms of body modification. I think adults can make adult decisions on that front, and I respect those decisions. The amount of hate that people like Renegade Evolution get in the feminist blogosphere – both for getting breast implants and enjoying them – doesn’t just baffle me, it enrages me. “Flames… Flames on the side of my face…” You know what I’m talking about.

I tend to be pretty upfront about the fact that I’d probably get plastic surgery myself at some point, particularly if I end up having kids and, well, if I have the money. Call me shallow, I don’t care. It’s my body, and I get to live in it. Not you.

Addiction to plastic surgery, however, is something worth commenting on. I read about how Heidi Montag has trouble with being able to hug people now. I wonder about why she did this to herself to begin with – why she took things so far – and I can’t help but think, “she thoughts that this would make her more popular and successful.”

First of all, I understand that she feel hurt when people like Perez Hilton would take her picture and crudely make fun of her chin. Stuck in the crosshairs like that, even people who are mostly comfortable with themselves will wig out from time to time. Still, there are plenty of non-generic people working in the entertainment industry, and they do OK.

Actually, scratch that – you often have to be non-generic in order to achieve major success.

Think about it this way: Angelina Jolie doesn’t look like she fell off the Barbie-mobile. She is memorable and recognizable and that, obviously, is a big part of her charm. It’s the same with anyone from Julia Roberts to Lady Gaga. Hell, it can even be argued that someone like Monica Bellucci – who, in my opinion, has to be universally recognized as stunningly gorgeous (otherwise, there is something wrong with the universe that we all occupy, and an investigation will have to be launched) – might have had a better acting career if she was just a little bit more off-kilter, a little bit more like a Sophia Loren, for example. Granted, Bellucci is an actress who takes chances, and can actually do something with her face and body as opposed to merely display them – and she can also make fun of herself, and that always helps – and I’m not going to throw a pity party for her on this blog, but I do wonder if her looks have been a double-edged sword from time to time.

And then I think back to Heidi Montag. I look at the way her face used to be. I’m not even going to bother with the body right now, I am thinking about the face. Dammit, it was more than just a decent face. It was the face of a woman you can look at and say, “yeah, I can see her getting cast in something.” It was recognizable. It had charm. It was pretty, with that slight Chloë Sevigny-esque awkwardness going on. And it worked, at least as an image.

The woman in the middle picture was different, but also recognizable. I don’t like her nearly as much as the woman on the left, but we could still get along.

And then we get to the picture on the right, and I am immediately bored out of my skull, and I am getting out the nail-file, and I am very pointedly filing my nails.

I’m sure that the new Heidi Montag will still be able to keep finding work. The ongoing drama of being Heidi Montag is work in and of itself, and for now, the media eats it up. But I think it kind of funny, I think it’s kind of sad – that this girl says she can’t go jogging anymore due to the enhanced status of her breasts, and she’s sacrificing all that (I do have an irrational love of jogging, but even if I didn’t, I’d still flinch) for what, exactly? Perez Hilton will probably no longer make fun of her chin, sure. He’ll be too busy to figure out whether to be exasperated or flat-out sympathetic.

We can blame this one on Hollywood, but even Hollywood is not that ridiculous. Getting slammed for your looks is part and parcel of being even somewhat visible, particularly for a woman (and yes, it’s sexist; and yes, I hate how I even need to point that out), but so is being recognized. Jennifer Grey’s career suffered when she got rid of that nose of hers. Just sayin.