There was once an old woman whose only joy in the world was her grandson. The old woman’s sons and daughters had all gone their own way, and only the boy stayed behind. He grew up handsome and good-natured. The old woman worked hard to keep him well-fed and well-clothed, and the two were happy. Sometimes, the old woman ached for something – but what it was, she couldn’t say. She looked, at those moments, to the west (why the west? She wasn’t sure), and sighed with a slight rattle in her throat, and went back to the tasks ahead of her. 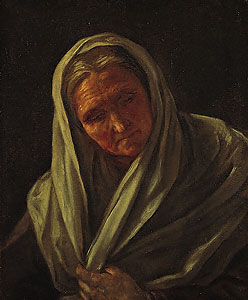 There came a time when the old woman noticed that her grandson no longer smiled as he did before. Most of his free time he now spent looking out across the valley of his birth, as if searching for something. Sometime, he cocked his head to the side and listened intently, although to what, the grandmother couldn’t fathom.

When questioned, the boy told his grandmother of a tale being whispered on the wind. The voice made his insides ache as if he had guzzled down a pot of boiling water, but when it quieted down, he ached even more. The old woman tried to soothe her grandson, but he would not be consoled, and, while she slept one night, slipped out of the door and followed the strange call that only he could hear.

Weeping, the old woman went to the village elder – a woman even older than she. The elder smoked a rolled-up leaf and stared at the old woman with her milky, unseeing eyes. The elder opined that the disappearance looked like the work of a witch that lives on a hill surrounded by a swamp. The witch was rumored to feed on human hearts.

The grandmother ran toward the setting sun, to where the blind woman’s shaking hand had pointed. Soon, she was out of the valley and in a foreign land. At night, she reached the edge of the swamp and searched for a way to get across. There was no path, not even a tree branch to feel her way. The woman was so desperate that she hardly noticed a dark-haired man with eyes like will-o’-wisps watching her, his hands on his hips.

“What did you lose on the other side of that swamp?” He inquired merrily when she began to cry.

“The most precious thing I have,” she said. “As if it isn’t obvious.”

“Perhaps then, you will want to know that whoever wishes to cross should just strip naked, and the swamp won’t suck them in.”

“I don’t believe this!” The woman laughed through her tears. “Young people today are even worse than…”

The man shrugged and, before she could finish berating him, shed his clothes. Trying to avert her eyes, she heard a splash. The man stood waist-deep in the brown swamp-water and even dared to splash some on the woman’s face. “Follow me,” he said.

The old woman was reluctant. Her body had been mashed and stretched by time. Her breasts hung flat and low and her belly sagged and her skin was spotted like a leopard’s. Still, she recalled that it was this body that had once warmed her husband and given birth to her daughters and sons. She stepped out of her clothes and followed the man.

The water was cold and dark and the swamp squelched hungrily all around her, but the man kept her spirits up by telling tales of unfaithful husbands who were turned into goats and bad-tempered children’s toys and all matter of foolishness, his voice reverberating in the fog.

Finally, the woman glimpsed the hill at the heart of the swamp. At its base, the young man said that he could no longer guide her, and kissed her hand. The old woman was about to chide him for taking liberties, when she remembered the state that they both were in.

Naked and exposed to the biting wind, she climbed the hill, holding on by the grassroots and her own blackened nails. Her back ached and a constant wheeze came out of her throat – foreshadowing a bad illness, she supposed. Her bladder gave out with no warning or apology.

Finally, the old woman collapsed, covered in dirt and other substances, near a large nest. The nest appeared abandoned, but the old woman counted at least five whole eggs in it. The witch would be back.

The old woman reflected on the fact that while things were certainly far from pleasant, giving birth to her firstborn, who originally tried to come out sideways, had been worse. With that, she fell asleep.

When she woke up, a slender witch sat on her chest and studied her with her amber eyes. The old woman tried to move, but found the witch to be surprisingly heavy, much heavier than a man.

“Where is my grandson?” She said after managing to get enough air into her aching lungs.

“I certainly didn’t call any boring grandson.” The witch was amused. “You on the other hand are a different catch altogether. Your heart is full of blood and warmth and righteousness. And you also have little use left for it. Give it to me. I’ve been calling you for a long time, but you were busy then. Now it is time for you to take your rest. ”

“I will not rest until my grandson is free of you,” the old woman said through clenched yellow teeth, though she was beginning to have her doubts.

The witch fluttered her long green eyelashes. “Your grandson is not mine to set free. Don’t worry about him. He will have a wife, and name his daughter with your name. It will come to pass, or I am not a witch.”

“He will be happy?” Her own question hurt, but it was a temporary hurt, like on the first night with her husband. The old woman closed her eyes and smiled. How simple everything was! And the plucking of her heart she felt less than her question to herself. When she opened her eyes, she expected to be now drenched with blood on top of everything else, but her body was clean and soft, light as a bird’s feather and new as the hatchlings pecking at the old muscle that used to pump her good old blood.

She walked easily off the hill, and saw the dark-haired man waiting for her, and, recognizing him, started to run.

21 thoughts on “The Grandmother”